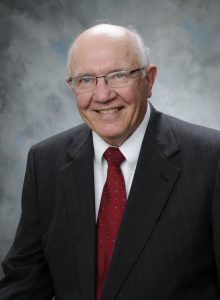 During the Depression and war years, Dick’s upbringing took him across the country where he attended many different elementary and secondary schools, including in Gering, NE, Riverside, CA, Wilmington, NC, Canutillo, TX, Orlando, FL and West Chicago, IL. After the return of his father, David Player, from military service, the family settled in Gibson City, IL where Dick graduated from Drummer Township High School in 1949. He cherished much about his experiences during these formative years, especially the times his mother and he lived with his close-knit extended family in Kimbell/Gering, NE and Riverside, CA. Visiting Riverside in recent years, Dick could recall with great specificity virtually every house on his paper route and the fun he had hiking atop Mt. Rubidoux. The Riverside years also include his days as a boy soprano performing at the famous Mission Inn. This was the beginning of a lifetime filled with music. Even as his health faded, were it not for the pandemic, he would no doubt have continued to regale audiences with his singing of As Time Goes By.

Dick entered the University of Illinois in the fall of 1949 and received a B.A. degree with a major in history in 1953. He attended the University of Illinois College of Law from which he received an LLB (later converted to JD) degree in 1955. This was followed by active-duty service in the Judge Advocate General’s Department of the United States Air Force from 1956-1958. Since that time, he practiced law with Webber & Thies, P.C., Urbana, a law firm including association over the years with founder and Dick’s father-in-law, Judge Charles M. Webber and brothers-in-law Craig R. Webber and Carl M. Webber. It was a source of great joy that he was joined at the firm by his sons, David and John, and later by his grandson, Daniel.

Dick’s law practice covered a wide range of areas for a diverse client mix. He was particularly fond of the work he did negotiating in the Peoples Republic of China on behalf of U.S. clients, and in helping with the development of Frasca Field, the home of his private airplane he flew for thirty years – even after his eightieth birthday. In practicing law for sixty-five years, there were few areas of the law at which he did not excel.

Dick lived a life of commitment to family, profession, church and community. His service to the community began in college when he was Student President of the University of Illinois YMCA. When African American students were unable to get a haircut on campus, Dick solved the problem by putting a barber at the Y on Wright Street. He also led a torch light march to the U of I President’s house to show support for University President George D. Stoddard, who students felt had been wrongly terminated by the Board of Trustees. Dick missed his first day of law school so that he could travel to Springfield to meet with then-Governor Adlai E. Stevenson II about serving as a student chair for Stevenson’s campaign for U.S. President. These were exciting years on the U of I campus; but the best part for Dick was when he met a recent transfer student from Mt. Holyoke, Marilyn Webber, when the two worked together at registration. Marilyn, too, became a leader on the U of I campus, including during her time as President of the Pi Beta Phi Sorority which was next door to the University Y. The two were married in 1954.

Besides the example he set for his family and those around him, perhaps Dick’s greatest impact on others was through his work as a leader in the legal profession. He had a record of accomplishment admired by lawyers throughout the country and even internationally. Dick was President of the Illinois State Bar Association (ISBA) in 1986-87 and served in many capacities in that organization, including holding every high office. During his term as president, ISBA membership increased from 25,000 to 30,000. He created a Task Force on Professionalism, which resulted in a professionalism report that has been used throughout the United States as a model for developing increased standards of professionalism within the Bar. Under his leadership, the ISBA adopted a policy of support for the merit selection of state court judges, and it approved recommendations for mandatory continuing legal education for lawyers, a concept ultimately adopted by the Illinois Supreme Court. Dick also appointed a Task Force on Lawyer Malpractice Insurance from which the ISBA started an insurance company providing malpractice insurance for Illinois lawyers at a reasonable cost. That company, the ISBA Mutual Insurance Company has designated him as one of its three “Founders.” He also created a special Committee to involve greater minority participation in the organized Bar. This led to a permanent committee which has provided leadership in bringing women and minorities into Bar Association work. In 1986-88, by appointment of Illinois Governor James R. Thompson, Dick served as Chair of the Governor’s Task Force on Merit Selection of Judges and Chair of the Steering Committee of the Task Force which drafted a proposed amendment to the Illinois Constitution providing for the selection of judges by appointment based upon merit. Dick was one of the three original incorporators of Attorney’s Title Guaranty Fund of Illinois, an organization designed to maintain the vital role of lawyers in real estate transactions.

Dick’s career in the American Bar Association (ABA) was equally distinguished. He was elected to the Board of Governors of the ABA in 1988 and served on the ABA Board from 1988 to 1991 (including a period on its Executive Committee). He was a long-time member of the National Conference of Bar Presidents and was also active on the Council of the Senior Lawyer Division, including acting as its Chair and Budget Officer. Dick served in the ABA House of Delegates from 1985 to 2012, including a period from 1994 to 2005 when he was in the House as the Illinois State Delegate having been elected to that position on four occasions by the Illinois members of the ABA. He also served as Chair of the Conference of State Delegates. In the American Bar Foundation, Dick served as Chair of the Fellows from 1993-1994, an honorary organization of lawyers consisting of one-half of one percent of the lawyers in the United States. Dick served as a board member of the American Bar Foundation from 1991-1994. He was also a member of the Board of Directors of the American Bar Retirement Association from 1992 to 2000, serving as its President in 1997-1998.

Dick received many awards during his lifetime. A subset includes: the Illinois State Bar Association’s highest honor, the Award of Merit, the Illinois News Broadcasters Distinguished Service Award, and the Abraham Lincoln Association’s “Lincoln the Lawyer” Award. In nominating him for the Lincoln Association award, Attorney Thomas Johnson stated: “For more than half a century, Richard Thies has served the interests of his clients with skill and integrity, has worked enthusiastically in support of countless civic and charitable organizations, and has provided leadership to the legal profession. Richard is an unfailing, unflinching exemplar of civic virtue and professional honor who is . . . ‘Lincoln hearted’ – in every good way.” Dick was included in the inaugural class of Champaign County Bar Association “Pillars of the Bar.”

Dick loved and participated in many sports (including the freshman basketball and baseball teams at the U of I). But his favorite sport was always the one that one of his children was participating in at the time (and with five active children, there were many). He taught each of his children a love of sports, and a desire for competition at the highest levels. He celebrated each child’s victories and was a great consoler in their defeats. All five of his children learned mightily from the lessons learned along the way.

A celebration of Dick’s life will take place at a later date due to the pandemic. Renner-Wikoff Funeral Home in Urbana is handling arrangements. Memorial contributions may be made to the Urbana Park District Foundation, the First Presbyterian Church of Urbana, IL, or the charity of the donor’s choice.